Click the camera icon on the map to view the webcam at that location. 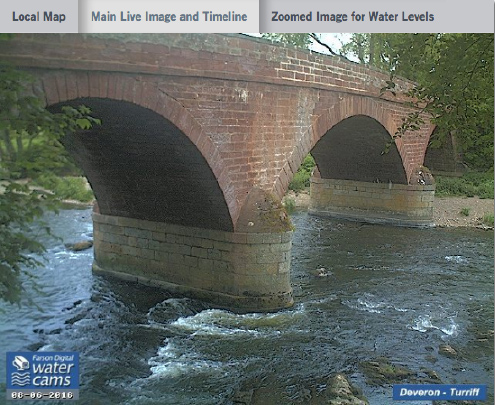 The Deveron rises in the hills of West Aberdeenshire in the remote area known as the Cabrach, and flows north before being joined on its left bank by the Blackwater.

It then swings in a north-easterly direction as it flows through Strathglass to Huntly. There are superb glides in its middle to lower reaches and due to the rocky bottom it has plenty of white water and can fish well in low water. It is prone to flash flooding and the water runs black but fines down to that golden brown colour which fly anglers love.

Salmon can be encountered right from opening day on February 11th anywhere on the river but the higher beats are usually a favourite. During April and May the brown trout fishing is superb with many specimens of 5 to 6 lb being caught each year.

Sea Trout start running towards the end of May until July and again a 7 lb fish is not uncommon.

The grilse run begins mid July but given water can start in June and can last all season.