Opening day of the 2017 fishing season was on Saturday 11 February, kindly hosted by Turriff Angling Association.

A group of around 80 anglers gathered to take part in the proceedings.

Deveron Board chairman Mr. M. Hay welcomed the crowd and asked Mr. Colin Hendry ex Scotland Captain and English Premier League winner with Blackburn Rovers – who is from Keith- to present the Morison Trophy to Mr. Craig who caught and returned the largest fish- 34 lb. - on a fly last season Craig also received an exclusive engraved fly box and a Vision Mag rod presented by Frank Henderson of Sponsors- Henderson’s Country Sports.  Pipe Major Hepburn then led the procession down to the river where Chairman of the River Deveron, Bogie and Isla Rivers Trust- Mr. R Shields- blessed the river with a large dram and Mr. Craig then made the first cast of the season.

The weather was overcast with temperatures around 1 Degree C. The river ran at 1 foot above normal and was a little cloudy after overnight sleet and snow.

As of 26 February, no fresh fish have been caught.

The Morison Trophy is now in display in our premises.

Back to Latest News 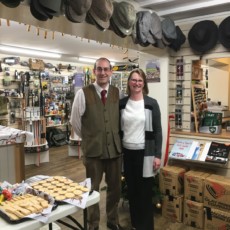